For the past several years, TV Land has honored several icons of television by placing bronze statues in various locations around the U.S. In addition to statues recognizing Mary Tyler Moore and The Fonz is one for Elvis Presley recognizing his “Aloha from Hawaii” TV special, the first satellite TV concert which was broadcast on January 14, 1973.

The Presley statue is located in downtown Honolulu in front of the Neil S. Blaisdell Center arena (formerly the Honolulu International Convention Center arena) where the concert originally took place.

The concert shows Elvis at the peak of his 1970s concert years. An estimated one billion people watched the concert live. It aired on NBC in the U.S. on April 4, 1973. No admission was charged for the audience, but through donations and concert merchandise sales, $75,000 was raised for the Kui Lee Cancer Fund in Hawaii.

The statue reflects intricate details of the “American Eagle” white jumpsuit that Elvis wore during the concert. Views from the front, back and side show the jeweled beads and chain decorations that drape the suit. Elvis has a guitar strapped over his shoulder and is holding a microphone resting on a mic stand. 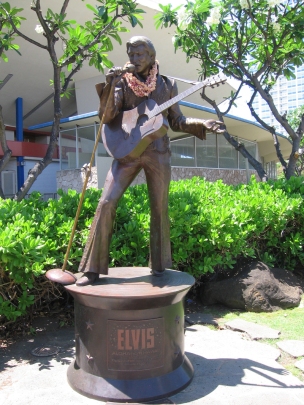 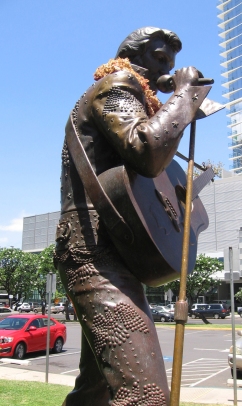 Presley’s statue sits atop a pedestal with the title “Elvis Aloha from Hawaii: The World’s First Satellite TV Concert, January 14, 1973.” Fans and locals make sure to keep a fresh Hawaiian lei around Presley’s neck.

On the sidewalk directly in front of the statue is a plaque presented by TV Land which states: “With supreme talent and sincere humanity, Elvis Presley made his gift the world’s. ‘Thank you. Thank you very much.’ From the people of TV Land.”

The statue serves as a wonderful tribute to a performer that brought a great deal of attention to Hawaii through his three movies that were filmed on the islands and the multiple concerts that he performed there. The Neil Blaisdell Center is located at 777 Ward Avenue in Honolulu.